Many people are unaware that the coffee tree was first discovered in the African forest of Ethiopia. Legend has it that in these forests a goat herder named Kaldi noticed his herd eating the cherries from a certain tree, afterward they became energetic and could not sleep that night.

So, he took the fruit to a monk who then made a drink with it, subsequently, he could not sleep that night.  The fruit then traveled to a monastery in Yemen, and through several trade routes, coffee expanded the globe as we know it.

But did you know that coffee trees do not and cannot grow just anywhere?  Focusing on the Arabica variety, the sensitivity of this tree only lends its fruit to climates that are frost and drought-free.  Where can you find this perfectly temperate climate you may ask?  Within the coffee belt!

Coffee plants grow in approximately 80 different countries inside what is commonly called the “Coffee Belt”. This is the area between the Tropic of Cancer and the Tropic of Capricorn.  Within these latitudes are three regions known as “The Americas”, “Africa”, and “Indo-Pacific” where all the world’s coffee is grown.

Yes, there are efforts to grow coffee in areas outside of this belt (looking at you U.K.), but they can never meet the same level of quality and yield of that which occurs naturally.  Now, don’t say you never learned anything ;^) 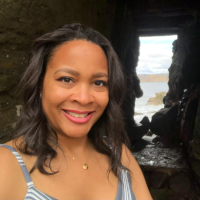 Owner of Menkeshkesh and certified roaster. She is on a mission to change the way we look at coffee.
Home